Alan Turing was born 100 years ago. Google honors the English mathematician, logician, cryptanalyst and computer scientist with an amazing Doodle on the homepage. It is an interactive „Turing machine“. The goal is to programm six binary strings with special methods. The doodle-machine proofs each string. If it is correct one char of the Google logo is filled with color. Here the solution if you have problems:

More about this amazing Doodle on searchEngineLand: How To Solve The Alan Turing Google Logo Puzzle 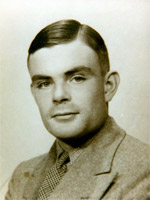 Alan Turing’s end is described at Wikipedia: „Turing’s homosexuality resulted in a criminal prosecution in 1952, when homosexual acts were still illegal in the United Kingdom. He accepted treatment with female hormones (chemical castration) as an alternative to prison. He died in 1954, just over two weeks before his 42nd birthday, from cyanide poisoning. An inquest determined it was suicide; his mother and some others believed his death was accidental. On 10 September 2009, following an Internet campaign, British Prime Minister Gordon Brown made an official public apology on behalf of the British government for the way in which Turing was treated after the war.“ Source

How to solve the ALAN TURING Google Doodle (youTube)