Who knows Les Paul? I guess today everybody. Google shows an amazing Doodle on the homepage. It is an interactiv guitare doodle. By rolling over you can play music with. If you click on the button (small Google-„g“) you can record your music. Les Paul was an american guitare-legende. The musician developed the electronic guitare and a lot of sound effects. He was born 96 years ago, on June 9, 1915 in Waukesha, Wisconsin, USA.

Here is the static version of the Les-Paul-Doodle. It is design as a guitare: 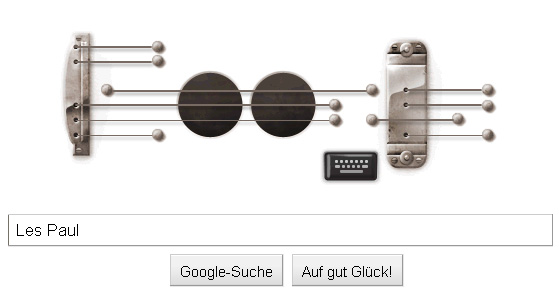 In the following video you can see how it works when you roll over it. It makes music if you roll over the strings. Each string wobbles like a real string and creates a sound. And what I personally love most is a tiny detail, almost a final touch: the strings chenges into a colored light when you roll over them. Genius and congratulations to the Doodle designer. Who has not done it yet: go to read the Google home page!

„Paul’s innovative guitar, „The Log“, built after-hours in the Epiphone guitar factory in 1940, was one of the first solid-body electric guitars. Adolph Rickenbacker had marketed a solid-body guitar in the 1930s and Leo Fender also independently created his own in 1946. Although Paul approached the Gibson Guitar Corporation with his idea of a solid body electric guitar, they showed no interest until Fender began marketing its Esquire which later became known as the Telecaster models.“ Source: Wikipedia

Here is a short video-portrait. Les Paul is as cool as you can expect from a famous jazz and country guitarist, songwriter and inventor. 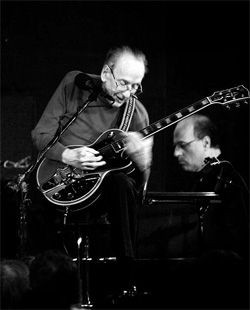 „He was a pioneer in the development of the solid-body electric guitar which „made the sound of rock and roll possible“. He is credited with many recording innovations. Although he was not the first to use the technique, his early experiments with overdubbing (also known as sound on sound), delay effects such as tape delay, phasing effects and multitrack recording were among the first to attract widespread attention.

His innovative talents extended into his playing style, including licks, trills, chording sequences, fretting techniques and timing, which set him apart from his contemporaries and inspired many guitarists of the present day. [He recorded with his wife Mary Ford in the 1950s, and they sold millions of records.“ Source: Wikipedia