Google honors the German bacteriologist Julius Richard Petri with an amazing doodle. It is a „real doodle“, that means, it shows a real process as a timelapse video. Julius Richard Petri has become famous mainly for his invention of the Petri dish. That are small vitreous dishes made of glas. The Doodle shows six bacterial cultures growing in the form of the Google letters. Funny idea for an extraordinary logo-animation …

First of all the interactive doodle in action, documented as a youtube video:

Julius Richard Petri was born exactly 161 years ago, on 31 May 1852 in Barmen, a small city in western Germany. From 1871 – 1875 he studied it Berlin at the Kaiser Wilhelm Academy of Medicine. He then worked as a physician at the Charité, a big medical center, in Berlin. In 1876 he received his doctorate. From 1877 to 1879 he worked at the Imperial Health Office as an assistant to Robert Koch. Koch is one of the most famous microbiologist at all, In those years Koch discovered the tuberculosis bacteria. He could cultivate the causative agent of anthrax (Bacillus anthracis) outside of the organism and describe its life cycle. A groundbreaking breakthrough in medicine. Koch received the Nobel Prize in Physiology or Medicine in 1905.

In 1877, during his collaboration with Robert Koch, he invented the petri dish named after him. It is suitable to grow autonomously and to examine cell cultures during growth. Petri has created the technical equipment, that Koch and many other biologists allows to the microbiological world.

In 1886, Petri bacame curator at the Museum of Hygiene in Berlin, from 1889 a full member of the Governing Council and the Imperial Health Office, from which he retired in 1900 with the title Privy Councillor. According to „WhonameEdit“ Peter was in his later days, a rather vain, overweight man, the sash around his protruding belly reminded observers on the equator of the globe :-) source. Julius Richard Petri died on 20 December 1921 in Zeitz (Saxony-Anhalt).

Petri has published the following writings:

Very funny is what appears when you roll on the individual shells. Then we see which bacteria has this culture can arise (Photoshop montage):

Where are the bacteria from in the Petri Doodle?

From left to right:

Because doodles are similar to stamps, I always look to see if there exists a corresponding stamp. Unfortunately there is no stamp for Julius Richard Petri . But at least Noble-prize-winner Robert Koch has been honored by the German post office: 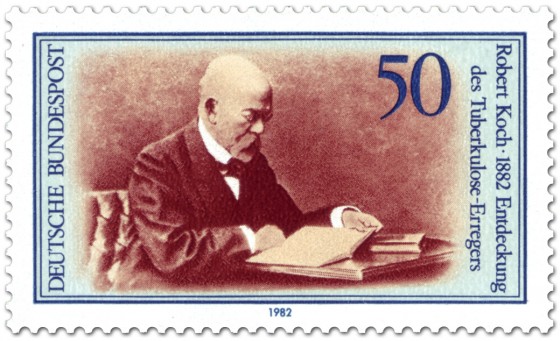