Three weeks ago Bing has relauncht its search-engine usability (see „Bing’s Fall Update: More Helpful, Local, Social and Mobile„). The following article focuses the changes in Bing’s image search. The new solutions of Bing-images are help- and useful, the only problem is the quality of the results. But the usability concept is – in my eyes – much better than the „new Google image search„. The changes initially are implemented in the english version of Bing image-search.

For comparison, first a look at the old navigation:

And now let’s take a look on the new navigation. The new navigation-bar takes more space than before. Disadvantage: There is less screen space for the image-results. Advantage: it looks much clearer and more user-friendly:

You can see five rows for navigation: On the top the meta-navigation, in row two the logo and the search input-field. In Line three you can improve in different vertical searches (Web, Images, News etc). The following is new: in the fourth row on the left side you can see the original search term [1]. And now Bing offers some related search-phrases [2]. I haven’t checked a lot keywords, but i noticed a surprisingly high accordance with Google’s related search-phrases. Well, ultimately, people look at Bing anything fundamentally different than Google.

In the fifth line then follows as before, first a list of „related people“ [3]. Of course this only works for people, but is a nice gimmick for users who just want to surf the images. On the right the well-known SafeSearch selection has not changed [5].

Most interesting is the option to choose the view-mode [4] (before: right as icons, smaller). You can choose from three view-types. The default view-mode is „medium“ – the images are arranged in a grid-like table, without any information: 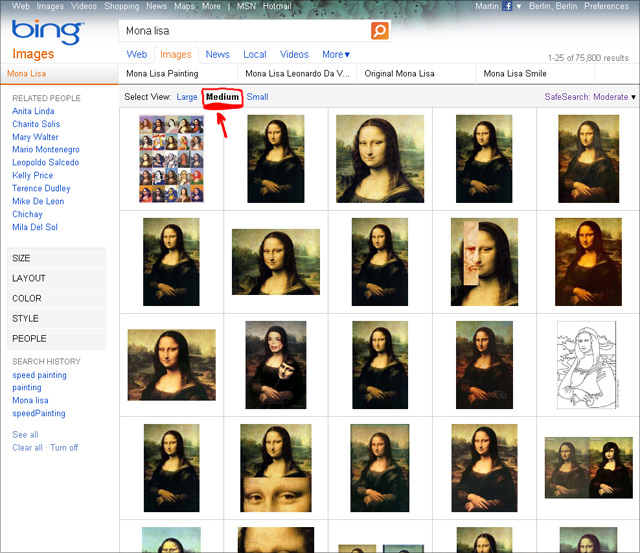 The view „Small“ is more like an impression that we know from new Google Image Search (not yet introduced in Germany). But as I said: in my eyes Bing does this more consistant than Google. The images are all cropped tough, so that they fit into a square. If this would be the only form of presentation I would find it impossible, but because it is only one of three options, I think it’s legitimate. It’s a little piece of art in imageSearch… 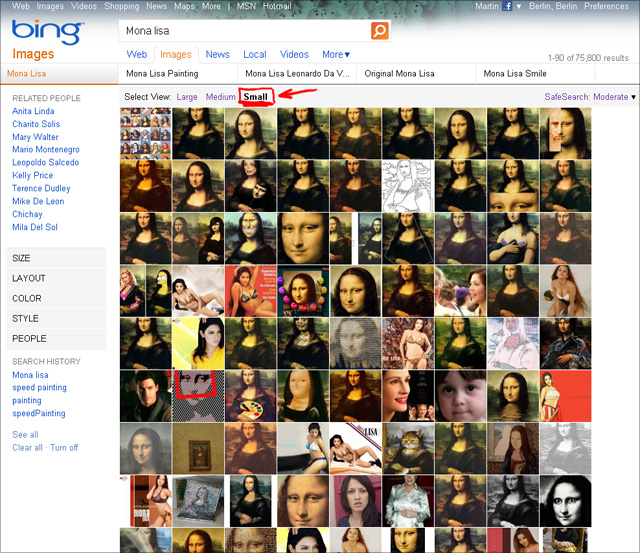 The third view-mode is „Large „. Compared to the previous representations it shows less images on the screen, but every single one is bigger and shows some relevant information without rolling over an image: 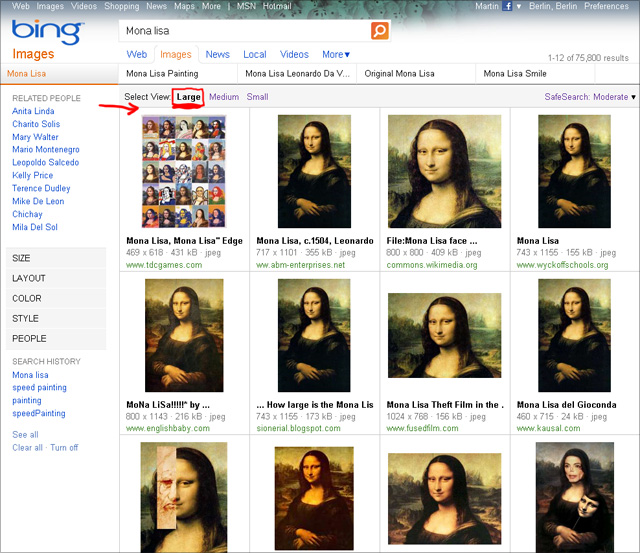 I think the small number of pictures is not a major prolem, especially because you don’t have to change the page for more image results. You just can scroll down.

Interesting, but unnecessary, is to show the grid. Before the relaunch Bing shows the results without the grid. Because the eye see the grid naturally, it should be hidden in my estimation because of the greater clarity.

In my opinion this is the biggest step. Before the Bing image-search has two scroll bars on the right: the browser scroll bar, and – within the Bing-surface, a second, just for the pictures. As I said, it was before and it was pretty lousy. Now Bing changed it: you can scroll the image result with the Browser. Much better and clearer. Btw: the idea of the „never ending result page“ has Bing launcht in 2009 – and Google has taken this idea in the new design.

If you roll over an image a Layer appears with a slightly larger thumbnail, including text and file information. Unfortunately, this „opening“ is a time-killer. It’s basically just like Google. The action itself is quite fast, but in summery this process took a lot of time. This is basically the wrong way in the evolution of web-experience – imageSearch should become faster, not slower.

A little unelegant is that the view-mode is scrolled away with the images. It would be better if it is fixed on the top. My first trails are pretty nice when I switch between the view-modes. From my point of view it’s a real benefit.

The safeSearch-Filter of Bing is a little bit lax. Ok, there are no really offensive images. But compared to Google (where the criteria gets much stronger in the end of october), the bing results shows a lot of … lets say: skin.

The main problem of Bing image search is the quality of the results. There are a lot of pictures that are nearly identically. Google is here better: double images are filtered out well. It is just my point of view: but in my eyes the google results have more relevancy.

Congratulations to the usability of the new Bing Bing image search. I think it is definitely more „intuitive“, „clear“ and „effective“ than the new Google Image Search. Only the results are better in the Google image search.

Hopefully the learn both from each other…