Google honors Frank Zamboni with a cool interactive doodle on the homepage (only an Jan. 16, 2013). Frank Zamboni was born 111 years ago (Jan 16th, 1901). He was an inventor. He becomes most famous for his invention of an ice resurfacer, with his surname being registered as a trademark for these resurfacers. In the 1970s, he invented machines to remove water from outdoor artificial turf surfaces, remove paint stripes from the same surfaces, and roll up and lay down artificial turf in domed stadiums. His final invention, in 1983, was an automatic edger to remove ice buildup from the edges of rinks.

It is an interactive game: an ice field is used and scetched. After this the user has to renew it by controlling the resurface with the arrow keys of the keyboard. Here the doodle in action (as a video): 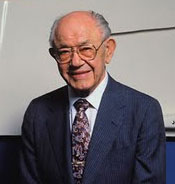 After seven years of experiments, Zamboni succeeded: an adjustable blade in a frame behind the machine shaved the ice smooth; the resultant shavings were then swept up and conveyed into a large holding tank; an apparatus at the back of the resurfacer rinsed and squeegeed the ice as the machine moved ahead, leaving a layer of water shallow enough that it bonded to the ice below almost instantly. In 1949, the „Model A Zamboni Ice Resurfacer“ became both patented (#2,642,679) and marketable. Source: Frank Zamboni @ MIT

He died of lung cancer in 1988 at the age of 87, about two months after his wife’s death. The Zamboni company has sold over 10,000 of its signature machine, the Zamboni Ice Resurfacer, commonly known as a „Zamboni.“ The 10,000th machine was delivered to the Montreal Canadiens in April 2012 for use at the Bell Centre. The company is still owned and operated by the Zamboni family, including Frank’s son and grandson. Source: Wikipedia/Frank Zamboni.

The „frosty style“reminds me to an amazing doodle. Last year Google shows a very funny and amazing doodle: The worlds largest observed snowflake. It was an animation.