Today the Google logo is written with blood. It honors the irish writer Bram (Abraham) Stoker and his Books. His masterpiece is „Dracula“ – also known as „Bram Stoker’s Dracula„. Until he was seven years ol, little Abraham couldn’t run ans play like other children. Noone knows why. But like a miracle thet everything was fine. Bram Stoker starts his life – and he did a lot of things. But because of his hard childhood he later writes dark horro stories full of death and undead…

After his illness Bram went on a rollercoaster ride through life. He was athlete, soccer star, student (history, literature, mathematics and physics), then official, journalist and theater critic. He got in contact with the actor Henry Irving, who became a longlife friend. In 1878 he married Florence Balcombe and moved with her to London, where he worked as the manager of Irving’s Lyceum Theatre. He got in contect with great actors of his time and traveled around the world.

Simultaneously, he wrote creepy horror stories. His debut novel, The Snake Pass was reprinted in 1889 in several newspapers and magazines, and a year later appeared in book form. Stoker then wrote numerous books, including the novel The Mystery of the Sea (1902) and the memoir Personal Reminiscences of Henry Irving (1906).

His letter and diary classic horror novel Dracula (1897) is best known. He introduced the figure of the vampire Count Dracula from Transylvania and thus created the most famous contribution to the genre. Modeled on the historical figure of Vlad Tepes, a known for impalements in the Romanian Wallachian prince was the 15th Century, nicknamed Dracula, and Joseph Sheridan LeFanus story Carmilla (1872, Carmilla, the female vampire), he also had the Hungarian travelers Arminius Vambery tells the spread of the Balkans vampire legends. Stoker’s novel tells the story of the young English lawyer Jonathan Harker, who loses from Dracula lured to his castle, his fiancee Mina Murray almost to the vampirism before the undead can be made by the Dutch vampire hunter Professor Van Helsing be snuffed out. 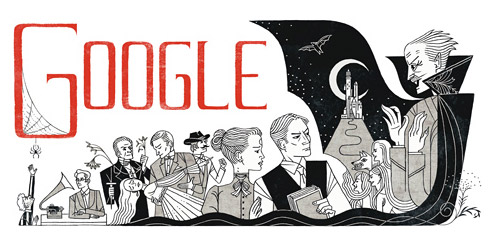 It is a static doodle, without any animation and not interactive. But anyway I like it – it’s an illustration style of oldschool horror stories. As allways I composed a video inkluding sound: