Google celebrates Louis Daguerre’s 224th birthday with a nice doodle. It looks like an old-fashioned photography. Louis-Jacques-Mandé Daguerre (1787 – 1851) was a French artist and physicist. In his time he became famous as a theatrical illusion-designer. Today he is recognized for his invention of the daguerreotype (1839). The daguerreotype is a single image which is not reproducible. It was the first commercially successful photographic process.

The doodle shows a family. The father is Daguerre himself. He sits arround with his family. But they look a little bit „unreal“ – they are the Google logo chars, dressed in clothes as in the 1830ies.

The father ist Daguerre himself. Take a look on the famous daguerretype and compare it.

Invention of the Daguerreotype

Louis Daguerre had developed the daguerreotype along with Joseph Nicephore Niepce. They meet in 1826 and agreed to work together. Their method was trial and error. In 1833 Nièpce died, but Louis Daguerre continued his tests. Finally, in 1837 he was lucky: the light, that he dropped through a small opening in a box, „burned“ into the plate on the backside of the box as an image. The daguerreotype was born. However, it took another two years before Daguerre published the process with the help of prominent scientist François Arago.

„Dakath announced the latest perfection of the Daguerreotype, after years of experimentation, in 1839, with the French Academy of Sciences announcing the process on January 7 of that year. Daguerre’s patent was acquired by the French Government, and, on August 19, 1839, the French Government announced the invention was a gift „Free to the World.“ Daguerre and Niépce’s son obtained a pension from the Government in exchange for freely sharing the details of the process. “ Source: Wikipedia 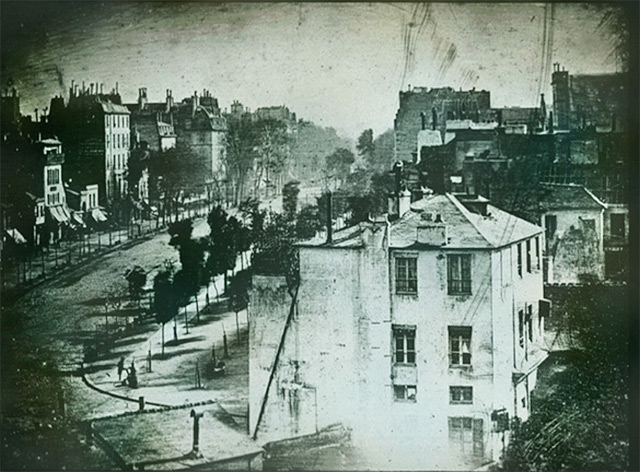