Google honors Rembrandt van Rijn – one of the most famous painters in European art history – with a nice doodle. It shows a famous self-portrait of Rembrandt (painted 1659) in front of a copperplate. This is because Rembrandt is also very famous for his etchings. The athmosphere of the doodle is typically for Rembrandt: warm and harmfull. Very nice doodle… 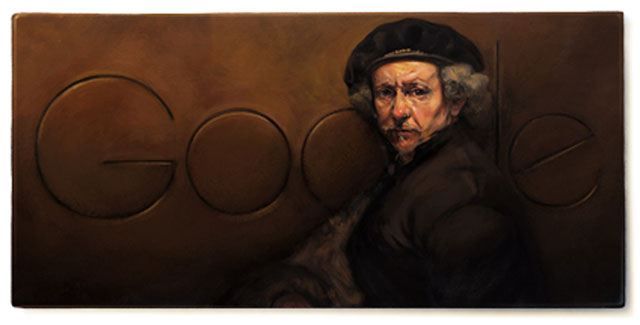 Rembrandt became famous in his early years, especially for his portraits. With his etchings he earns some money, but unfortunatelly he was not the best in managing money. At the end of his life he was poor and nearly forgotten. He was buried in an unmarked grave in the Westerkerk, Amsterdam.

The doodle is inspired by a famous Rembrandt-self portrait of 1659. Rembrandt was 53 years old when he paints it – and poor. Anyway it shows a strong and proud man with a black basket, a typical detail in his self-portraits. He seems to say: Come on an see me, the great painter. 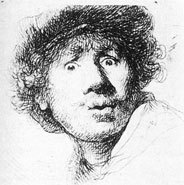 Rembrandt produced etchings for most of his career, from 1626 to 1660, when he was forced to sell his printing-press and virtually abandoned etching. Only the troubled year of 1649 produced no dated work. He took easily to etching and, though he also learned to use a burin and partly engraved many plates, the freedom of etching technique was fundamental to his work. He was very closely involved in the whole process of printmaking, and must have printed at least early examples of his etchings himself. At first he used a style based on drawing, but soon moved to one based on painting, using a mass of lines and numerous bitings with the acid to achieve different strengths of line. Towards the end of the 1630s, he reacted against this manner and moved to a simpler style, with fewer bitings. He worked on the so-called Hundred Guilder Print in stages throughout the 1640s, and it was the „critical work in the middle of his career“, from which his final etching style began to emerge. Although the print only survives in two states, the first very rare, evidence of much reworking can be seen underneath the final print and many drawings survive for elements of it. Source: Wikipedia

As allways I produced a video of the doodle, underpainted with the music of Johann Sebastian Bach’s „Brandenburg Concerto No4“. Hope you like: 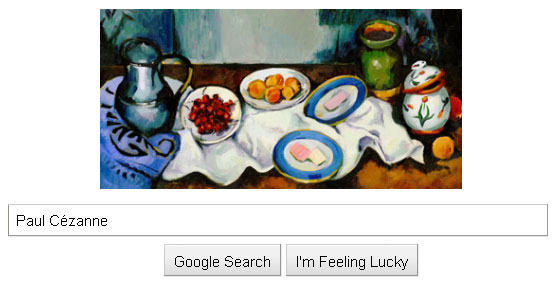 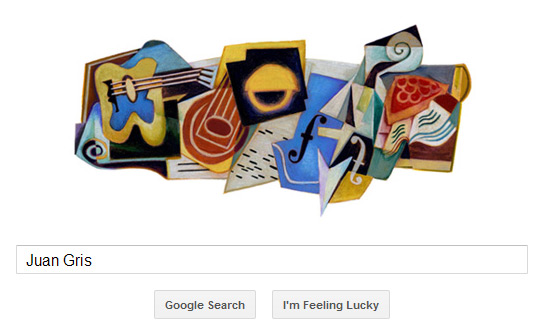 My interpretation of „The anatomy lession of Dr. Tulp“ (Cartoon by me, 2006): 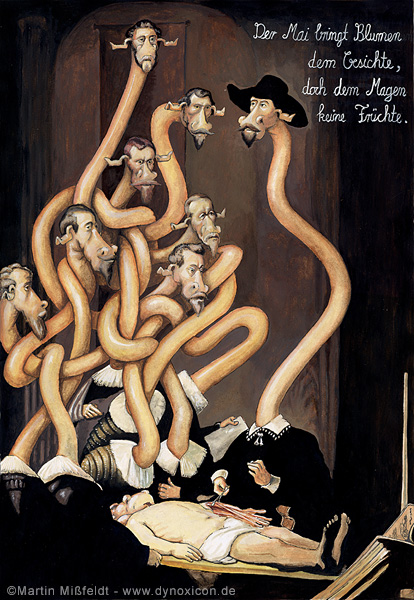