Currently Google indexes new images very fast. My new images could be found in Googles image search after 24 hours. Absolute record time – the image search was never faster. Maybe the reason is a changed distribution of tasks between the Googlebots: usually the „Googlebot-Image/1.0“ crawls the images, but actually the normal „Googlebot/2.1“ does most of his job. But a look on my logfiles brings some surprize…

First, some examples and numbers: Yesterday I uploaded the picture „Optimizing images (blue eyes)“ – and today it is in the image search. Searching for the cryptic key „blue optimizing images“ shows the image also as an universal image in organic search (Ok, no one searches this, but it’s about principle ;-)). Conclusion: indexation of a brand new image on a brand new domain (www.tagSeoBlog.com) within 24 hours. Awesome!

The total number of images has grown significantly: in mid-November the (german) tagSeoBlog-gallery contains 2150  pictures, today it’s 2420. But I haven’t uploaded 300 pictures, perhaps 40. Obviously, Google is not only fast in indexing new pictures, but also in filling gaps. Before November not every image was indexed – today it seems that Google wants them all.

The whole thing startet late October and early November. Google has done major changes in the algorithm – for example regarding the safeSearch-filter criterias (which tumbled hundreds of galleries from the index). The main changes concern the process of indexation. Google confirm that in this official blog-post: „Official Google Blog: This week in search 12/10/10“ (at the end).

Thanks to Ingo of Schnurpsel.de: because of his observations I take a look into my log files to check the activity of Googlebots (see also: How to analize your logfiles). Which bot takes the pictures? And how often? Here the surprizing result: In June 2010 it was as expected: the „Googlebot-Image/1.0″crawls about 94 times per day on my pages. The normal „Googlebot/2.1“ has also looked at pictures, but only about 10 times per day.

Yesterday, this ratio is reversed: the Googlebot/2.1 took 75 times my images. The Googlebot-Image/1.0 was only 41 times on my sites. On 28/12/2010, the ratio was even more pronounced: 56 times the Googlebot – and only 4 times the Imagesbot. I checked some more days – it shows the same trend. The following graphic shows no concrete values, but the trend: 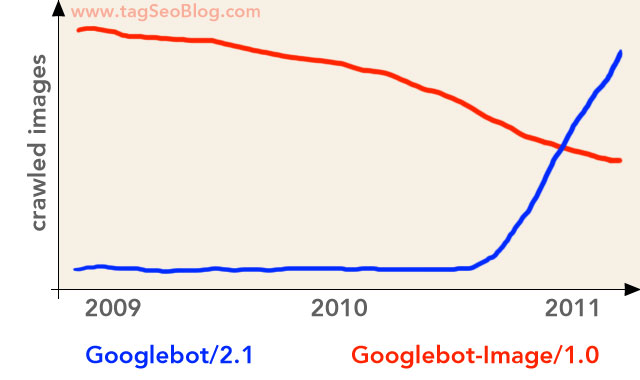 I will continue to monitor the trend. But it seems clear: the reason for the rapid indexing of new images is obviously the normal Googlebot/1.0 that did now the main job of the old imagebot.

Finally, a forecast. Remembering last year, it was quite similar in the beginning of 2010: even then the indexing was running fluently. It took about 4-6 days until new images appear in the Google image-search. This continues to the early February. Then the process was stalled before it stops in the very middle of March. The phase of image-update followed until mid-November 2010. In short: the current situation is wonderful, but may be it changes again.

One indication of hope, however, the indexing activities of the normal Googlebot is new. Last year it did only his job and nothing else.