Google is working on a „special app“ for the new Google Glass (project Glass): a body scanner („x-ray app„). That should be possible, the people, seen through the glasses, take virtually with semi-transparent clothes to something more closely. The principle is simple. Google can now detect and identify faces. It’s the same course with clothes. Software analyzes the garments and filter them out virtually. What remains of the person, as God created it.

The amazing feature was announced yesterday on the official Google Glass account:

In short: „Yes, we are working on an application which allows to filter out clothes“. Facebook CEO Zuckerberg seems to be well opened for some time, which is probably the reason why he shows so much interest in the new Google Glass. 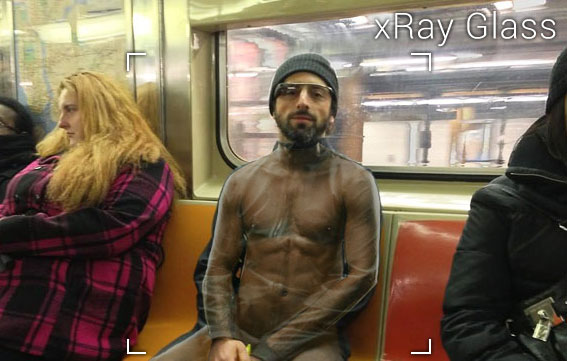 How to protect? With Apple’s underwear!

Apple has recognized the opportunity and gives the spoilsport. They announced to launch a special underwear that can fool Googles body scanners . The underwear (for men and women) is made with asbestos and lead threads and fits in any way in the body shapes. On the contrary, the lumbar and thoracic area, were deformed by the new Apple underwear (see the picture above left). So you can protect yourself from the new Google x-Ray-app.

What will „Google Goggles with x-ray app“ cost?

Google has announced to launch the new „X-Ray App“ for Google Glass in May (ie before the official launch of Google Glass). However, Google would not be Google if they won’t think in terms of money: the „x-ray app“ should cost an extra amount of $ 3,999. To protect the taste sphere there should be a preference, with which you can set a gender-filter: either one sees only men or only women naked.