Today ist the 113th birthday of the famous amarican artist Alexander Calder. Calder was a very playful artist and a leading exponent of kinetic art. Kinetic art is art that works with moving things. He invents the artistic (outdoor) mobile. Google honors this protagonists of abstract art with an interactive doodle on the homepage. The following video gives an idea of the interaktive moving doodle:

The Doodle shows the Google Logo as little forms on a mobile. The were colored as the Google-chars. I made an image to illustrate this: 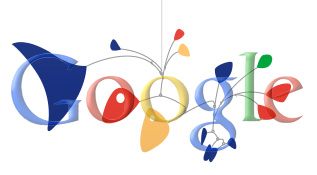 I really love the shadow of the mobile below the search buttons. Todays doodle was obviously inspired by a work that is called „The star“: 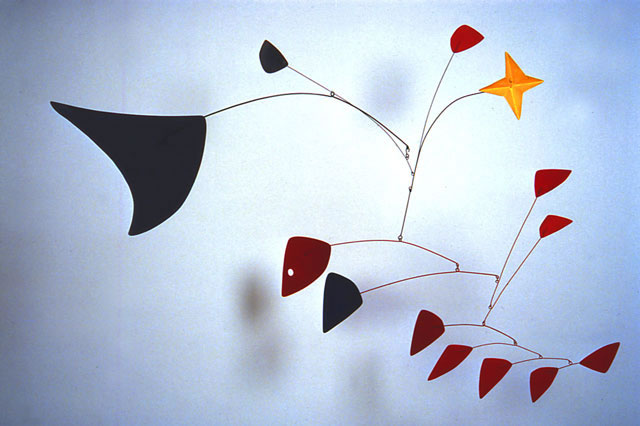 "The star" by Alexander Calder

Alexander Calder was born on 22 July 1898 in Pennsylvania (USA). His father and grandfather were artists, it was obvious that the little Alexander was given a three-dimensional sense of things. His artistic career began with traditional drawings and paintings. As often in those days a visit to Paris in 1926-27 changes everything: it was an an artistic turning: Calder began to deal with mobiles. With his early concepts he was traveling not only into kinetic art, but also into abstraction.

„In June 1929, while traveling from Paris to New York, Calder met his future wife, Louisa James, grandniece of author Henry James and philosopher William James. They married in 1931. While in Paris, Calder met and became friends with a number of avant-garde artists, including Joan Miró, Jean Arp, and Marcel Duchamp. A visit to Piet Mondrian’s studio in 1930 „shocked“ him into embracing abstract art.“ source: Wikipedia