Julia Child was born 100 years ago. Google celebrates the TV-cooking legend with a lovely doodle. Julia Child was an American chef, author, and TV star. She brought the French cuisine on American dishes. Child wrote the very popular cookbook: Mastering the Art of French Cooking. The Doodle seems to be a kitchen in a TV-Studio. Julia created using the Google letters a delicious menu. After world war II she married and moved with her husband to France. In Paris, she attended the famous Le Cordon Bleu cooking school and later studied privately with Max Bugnard and other master chefs. This was the beginning of her cooking carrier.

But back to the Child-doodle. First the picture: 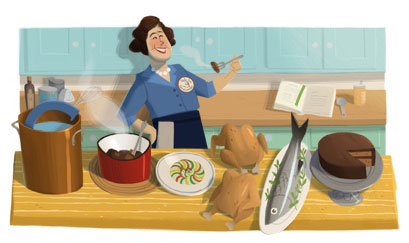 The Doodle seems to be a kitchen in a TV-Studio. Julia created from the Google letters a delicious menu. Ten minutes before the doodle artist began to paint it looks like this: 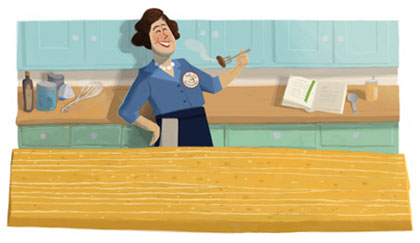 If you haven’t seen it: the things on the table build the Google logo. A big cooking pot with the Google „G“. A red pot – Julia just costs the „o“ :-) A plate with cucumber and pepper. Two uncooked geese – the small g. A nice fish on a plate („l“). And finally an amazing chocolate cake. 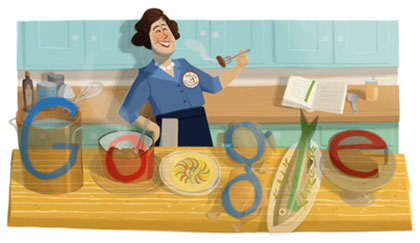 Here the doodle as video documentation:

Finally three very nice videos. The first is Julia tries to cook a Hamburger, but … And poor David Letterman has to eat it – funny:

The second one is a TV-series Show – I think it in the fifties: