[Actual: „Google honors Louis Daguerre with nice doodle„] … „Genius is one percent inspiration, ninety-nine percent perspiration.“ To perspire means sweating, and the man who said this was Thomas Edison. Today the large, sweaty american inventor would have turned 164 years old. Thomas Alva Edison was born on February 11, 1847. In that time there was no electricity, no telephone, no recordings or other products, it was a completely different way of life. Thomas Edison patented 2,000 inventions. Many of them are related with consumer products that make life easier. He has electrified New York and co-founded a company, that grows to a global corporation: General Electric.

When I saw today’s Doodle this morning, I first thought of a drawing by Leonardo da Vinci. Leonardo also draws construction plans of mechanical inventions. But no: the Edison-Doodle illustrates the process of converting electricity into light. Here it shines:

On the Google homepage you can see that Doodle is an animation: the light bulb shines  more or less. And there was light – thanks to Thomas Edison. I don’t want to describe the related circuits in detail (the documentation of Edison and his staff about light bulb took at least 40,000 pages). You can simply say: on the left, electricity is generated – and on the right it is transformed into light. The middle section is more or less decoration …

Great inventor, but no hand for making money… 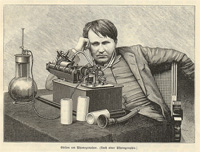 Thomas Edison was not only an inventor, but also entrepreneur. He invented, for example, the phonograph (record player), the dynamo, the mechanical typewriter, the carbon-bulb, the telegram, electric chair (!) and much more. But despite these numerous everyday inventions that could be monetized in consumer products, Thomas Edison was never a rich man. He participates in various companies, but the money earn others. He was an inventor, not capitalist. But as an inventor he was a realist and a typical child of his time: „During all those years of experimentation and research, I never once made a discovery. All my work was deductive, and the results I achieved were those of invention, pure and simple. „. While other of his inventions earned a fortune, he remained throughout his life a steadfast man who could live off the royalties of his inventions quite well.

And last, but not least another quote by Edison: „Just because something doesn’t do what you planned it to do doesn’t mean it’s useless.“

Thomas Edison died on October 18, 1931. More about his life and works on Wikipedia.

Here an very early movie, done with a technique by Thomas edison. The quality is not the best, but it’s funny at all –  „The Dinosaur and the Missing Link“: