„Like a boss“ Campaign in Google’s image search. How it works…

Perhaps you have heard about the clever „Like a boss“ campaign. Searching for „ultimate business car“ the Google image search showed an amazing image campaign. First two pictures were a car – followed by the sloagn „like a boss.“ The fifth picture shows the VW-Logo.  The campaign-video says: „Google didn’t flash us. We flashed Google – Like a boss“. Ok, funny thing. But how does it work?  The following describes it.

Perhaps anybody else want to try it. But don’t forget: the idea was a creative act of three students of the „Willem de Kooning Art academy Rotterdam“, Guus ter Beek, Alwin Lanting und Pim van Bommel. They call it „search engine advertising“. Brillant, guys. Btw: Willem de Kooning was a famous netherlandish expressive painter. The three worked together with a netherlandish agency. Seems that VW has not paid them for the campaign. They build it to promote themselves (but I am not really sure about this). Here a screenshot of what people have seen some days ago when the search for „ultimate business car„: 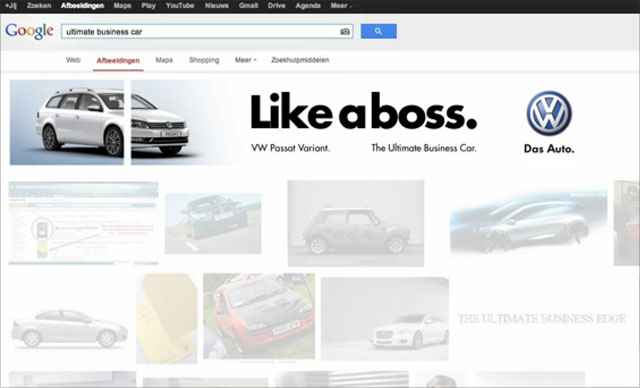 What is the trick?

Basically, it’s quite simple: take a rather „weak“ keyword. Weak means not that it is unimportant or uninteresting. A weak keyword is one without competition. Nearly nobody searches for „ultimate business car“ – and therefore there is no competition (in the google search results) for it. At least before the campaign became public. Meanwhile, the keyword has way more competition, and the three creative Seos have cleverly deleted their pictures quickly – because it is hard to keep the pictures on the top places against fresh news articles and blog posts. 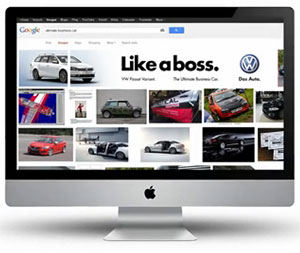 Split a panoramic banner in five parts – reguarding the gap between the image search results. Then save these five images on five different domains and embed them into five webpages. This is neccessary because Google usually uses one or maximum two images per domain for a keyword in the results.

Then wait … and wait. It took a while until all images are indexed depending on googlebot activity. Of course there are ways to accelerate the process. But why? If the keyword is without competition you just have to wait. In my estimation, it took about 2 weeks before the five images were indexed. The most important thing at this stage is to keep the whole action secret. Because if anybody finds out it is – at this point – no problem to boycott it with only one competetive image.

When all five paintings are indexed and visible in images search, you only have to fix the order. This is easy because most people know that the number of image copies is a ranking factor. Generate five copies for images #1 (on other pages of course), four copies for #2 and so on. And then, also here again: wait. The Googlebot must find all copies.

That’s it. Some mornig you waek up, search for your keyword – and your campaign is online. Now the really hard work starts: you have to make screenshot, produce an image-video, share your concept with a lot of linkerati – and of course, delete your images after one day, when all importent linkerati have seen it. Otherwise their article images will destroy the nice campaign.

That’s it. If you ever plan to use Google image search for a clever advertising campaign, call  Guus ter Beek, Alwin Lanting und Pim van Bommel :-) (not sure if they are really students…)

Volkswagen Search Engine Ad from The SEA Team on Vimeo.

If somebody didn’t get it – I also offer image seo :-) This article in german.

5 Comments zu "„Like a boss“ Campaign in Google’s image search. How it works…"