Today Google honors the American author and humorist Mark Twain with a doodle on the homepage. Mark Twain was born in 1835 in Missouri, USA – 167 years ago. When he was four, his family moved to a port town on the Mississippi River.Mark Twain was a restless artist with many interests and ideas. The doodle shows three scene with two boys. They are inspired by Twains most famous figures: Huckleberry Finn and Tom Sawyer. Seems that they want to overpaint the Google logo. First of all the complete doodle. It is very wide, a kind of panoramic doodle:

The doodle is like a comic: you can see three scenes. On the left side little Huckleberry Finn animated Tom Sawyer to take a bucket with white color.

In the centered scene Tom overpaints the Google-logo on the fence. Huckleberry eats an apple (!) – What will Google say with this metaphore? ;-)

On the right side Tom sits in the gras – he has overpainted it complete. Huck gives a „Thumb up“.

I really like this doodle. It reminds me on old children book illustrations. nice. 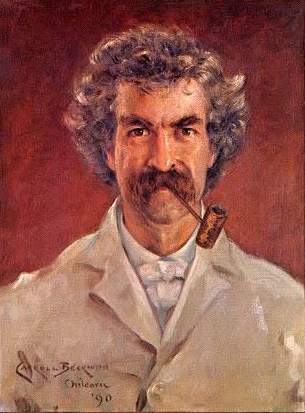 Twain grew up in Hannibal, Missouri, which would later provide the setting for Huckleberry Finn and Tom Sawyer. He apprenticed with a printer. He also worked as a typesetter and contributed articles to his older brother Orion’s newspaper. After toiling as a printer in various cities, he became a master riverboat pilot on the Mississippi River, before heading west to join Orion. He was a failure at gold mining, so he next turned to journalism. While a reporter, he wrote a humorous story, The Celebrated Jumping Frog of Calaveras County, which became very popular and brought nationwide attention. His travelogues were also well-received. Twain had found his calling.

Twain was born during a visit by Halley’s Comet, and he predicted that he would „go out with it“ as well. He died the day following the comet’s subsequent return. He was lauded as the „greatest American humorist of his age,“ and William Faulkner called Twain „the father of American literature.“ Source and more about Mark Twain on Wikipedia.

As usual I documented this doodle as a video: