Today Google honors Robert Noyce, „the Mayor of Silicon Valley“. He was born 1927 (84 years ago) in Burlington, Iowa. Robert Noyce is credited (along with Jack Kilby) with the invention of the integrated circuit. 1957 Noyce co-founded Fairchild Semiconductor. 1968 he co-founded Intel. Robert Noyce was granted 16 patents. He was also a mentor and father-figure to an entire generation of entrepreneurs.

The doodle shows an old fashioned „integrated circuit“ (microchip).  It looks a little bit like the new iPhone 6 in pharaonic style (egyptian style) :-) 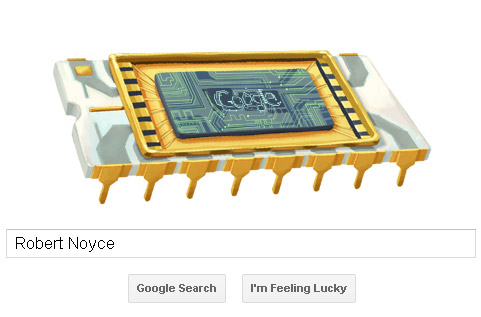 I have never heard before about Robert Noyce. Did you?

”Noyce and Gordon E. Moore founded Intel in 1968 when they left Fairchild Semiconductor. Arthur Rock, the chairman of Intel’s board and a major investor in the company said that for Intel to succeed, Intel needed Noyce, Moore andGrove. And it needed them in that order. Noyce: the visionary, born to inspire; Moore: the virtuoso of technology; and Grove: the technologist turned management scientist. The relaxed culture that Noyce brought to Intel was a carry-over from his style at Fairchild Semiconductor. He treated employees as family, rewarding and encouraging team work. His follow-your-bliss management style set the tone for many Valley success stories.” Quelle: Robert Noyce @Wikipedia

As allways i documented the doodle as a small videoclip: