Today Google honors the american artist Mary Blair with a nice colorful doodle. It seems as little Mary draws the doodle around herself. Mary Blair gets famous a the color stylist of some Walt Disney productions as „Alice in Wonderland„, „Cinderella“ an „Peter Pan„. Her way of coloring has a deep impact on many background and graphic designer. Mary was born on October, 21, 1911 – exactlty 100 years ago, as Mary Browne Robinson in Oklahoma.

When she was 7 years old, she moved with her parents to California. After finishing school she studied drawing and illustration. In 1934 she married Lee Everett Blair, who was also an artist. Both worked for Walt Disnay Studios. 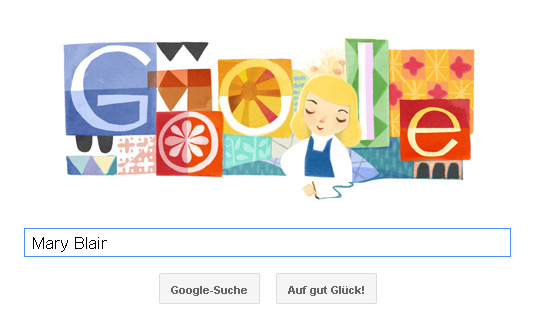 After finishing „Peter Pan“ in 1953 she resigned from Disney Productions and went her own way. Mary Blair created advertising campaigns and illustrated some books.

„At the request of Walt Disney, who highly regarded her innate sense of color styling, Mary began work on the attraction It’s a Small World, originally a Pepsi-Cola sponsored pavilion benefiting UNICEF at the 1964 New York World’s Fair which moved to Disneyland after the Fair closed and was later replicated at the Magic Kingdom in Walt Disney World Resort as well as Tokyo Disneyland, Disneyland Paris and Hong Kong Disneyland.“ Source: Wikipedia.

Here the doodle-video for Mary Blair: