Akira Yoshizawa was born an March 14th, 1911. He is called the „grandmaster“ of origami. Google honors Akira Yoshizawa with an amazing doodle on the homepage. The Doodle was created by the Origami-Artist Robert Lang because Yoshizawa who died in 2005 never thought to build a Google-Origami. Origami (from ori meaning „folding“, and kami meaning „paper“) is the traditional Japanese art of paper folding.

Besides the Doodle-chars four butterflys can be seen. The following video of the „Yoshizawa-Doodle“ these Butterflys are aweked to live:

Akira Yoshizawa has created over 40.000 models for origami. Hundreds of them are published in 18 Books. The following picture shows the old Yoshizawa with some Origami animals: 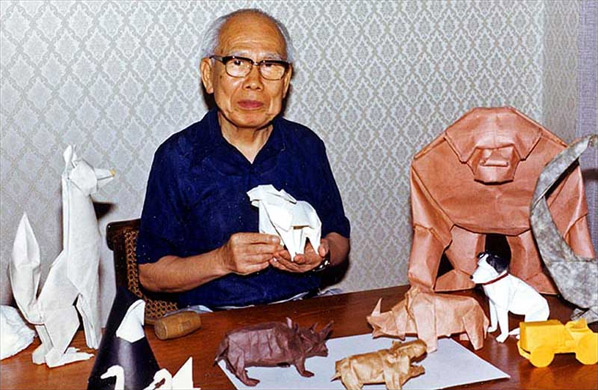 Akira Yoshizawa was born 1911 in Japan. His father was a dairy farmer. When a child, he took pleasure in teaching himself origami. He moved into a factory job in Tokyo when he was 13 years old. His passion for it was rekindled in his early 20s, when he was promoted from factory worker to technical draftsman. His new job was to teach junior employees geometry. Yoshizawa used the traditional art of origami to understand and communicate geometrical problems. 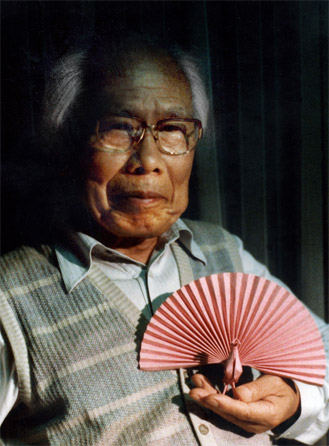 In 1937 he left factory work to pursue origami full-time. During the next 20 years, he lived in total poverty, earning his living by door-to-door selling of tsukudani (a Japanese preserved condiment that is usually made of seaweed). His origami work was creative enough to be included in the 1944 book Origami Shuko.

However it was his work for a 1951 issue of the magazine Asahi Graph that launched his career although, according to another account, his first step on the professional road was a set of 12 zodiac signs commissioned by a magazine in 1954. In 1954 his first published monograph, Atarashi Origami Geijutsu (New Origami Art) was published. In this work he established the Yoshizawa-Randlett system of notation for origami folds which has become the standard for most paperfolders. The publishing of this book helped Yoshizawa out of his poverty.