Olympic Doodle No. 3 presents „Diving“ (July 29th, 2012). Diving will feature 136 athletes at the 2012 Olympics. Diving requires acrobatic excellence and as athletes dive from heights of up to 10m. Diving is the sport of jumping or falling into water from a platform or springboard, sometimes while performing acrobatics. Diving is an internationally-recognized sport that is part of the Olympic Games. Hopefully there is water in the pool below …

The 2012 Olympics in London will feature competition in 8 events. Men and Women events each of 3m and 10m springboard, each single and synchronized. More about diving in London 2012: www.london2012.com/diving/

The diving-doodle shows a woman standing on a 10-meter-tower.In front of her you can see a pool with the Google-Logo on the ground.

But: I think if she jumps she will not land in the water-pool. So I have animated the scene, unfortunately for her:

So here it is how it looks like after …

2008 Google shows another „diving-doodle“ (with a jumping pig): 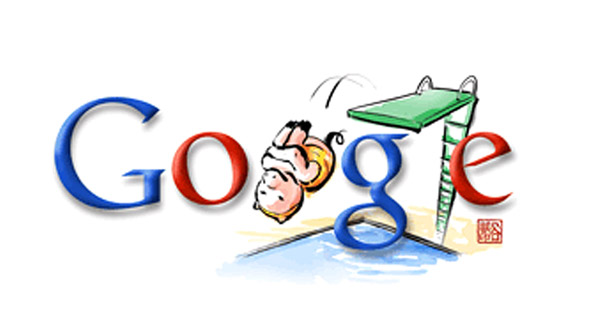 More about diving at Wikipedia.