Olympic Doodle No. 9 presents „Pole Vault“ (August 4th, 2012). Pole vaulting is a track and field event. A person uses a long, flexible pole as an aid to leap over a bar. This could be very high… The world record is held by Sergey Bubka (UKR), whow jumps 1994 6,14 m. Today the pole usually is made either of fiberglass or carbon fiber. Pole jumping competitions were known to the ancient Greeks, Cretans and Celts. More about Pole Vault.

I shows a girl with long hair jumping with a pole over a bar. In the background the stadium with a big audience. Behind it the stand giant Google chars. Some mountains and clouds in the background gave the scenery a very smart and nice coat. Nice one, I like. Especcially the rainbow color cycling. Dind you see the google logo colors on the top of the stadium?

During the Olympics 2008 in Beijing Google hasn’t shown a „Pole Vault Doodle“, but  a „High Jump Doodle“: 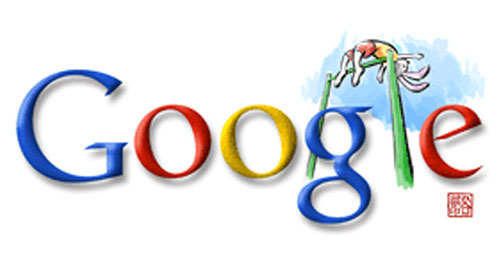 At the summergames 2004 in Athens there was no „Jumping Doodle“. But at the Olympics in Sydney (2000) they show a Pole Vault Doodle:

Here the Doodle as a video:

Please find the Track and Field Programm – including the pole vault competition – on the official site.