How does the selection of the youTube video thumbnails work? Is it by random? Can you change the preview image that is displayed on youTube lists? Two years ago I described a method of how it worked (at that time). Therefore you could use a timer. Included to the video you could read the frame-timecode of the three video thumbnails. With this knowledge you could replace in the video exactly these three frames. After uploading again you saw your preview thumbnails. Now I have tested this method again. And, unfortunately: it fails. This article shows the experiment and the results. Maybe someone has another idea?

If you are a preferred partner on youTube, it’s easy: you could upload prepared image as the preview image. But that only applies to very few youTuber. Usual is this: if you upload a video on youTube, three thumbnails are offered. You can reach this option if you open the „Video Manager“ and choose a video by clicking on „Edit„.

You see three video thumbnails. After the upload the middle one is selected by default. However, you can choose one of the both alternative thumbnails. Note: This change takes a while. Previously could take up to 24 hours, now it’s a matter of minutes. But patience is always needed.

What if none of the three images is really appropriate?

The solution that worked for a long time was associated with the timer, which I had described before (only german). But the following test shows that it is so not still working. The youTube programmers have hidden the timecode below the thumbnails. And they have changed the algorithm of the thumbnail-generator. Unfortunately. But anyway, here is the actual test.

I create a series of videos that are all exactly 10 seconds long. And I have created a color-sheet, which moves from left to right. So you could compare the different video thumbnails exactly. Here is one of the videos:

I’ve made a change in each video:

Then I compared the thumbnails of the eight videos. In one video, it looks like this: 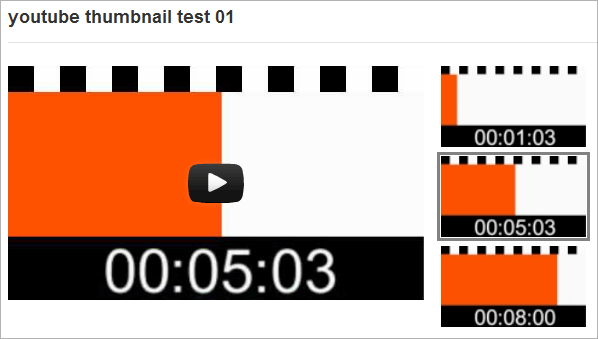 Things become interesting when the thumbnails are shown in a table: 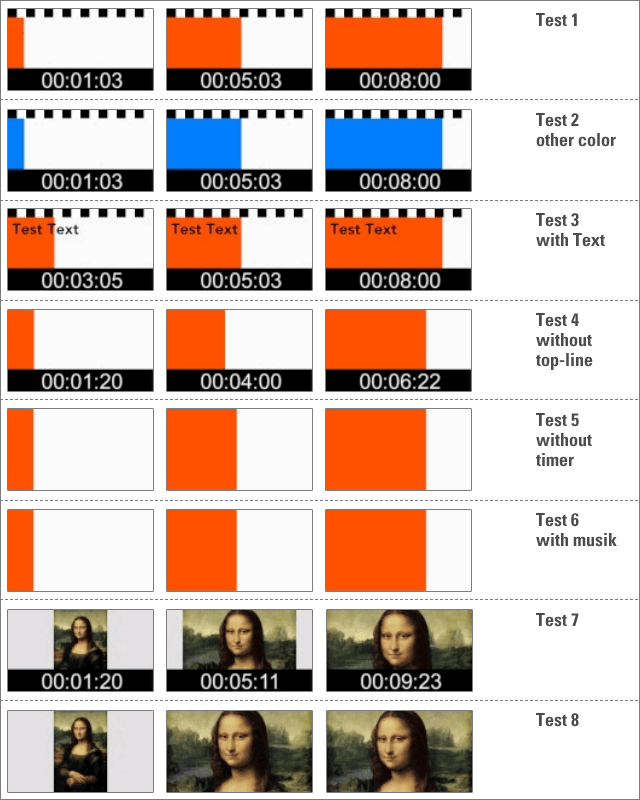 To verify the whole thing, I have uploaded a copy of the first video to a different channel. A comparison of the thumbnails shows that they are identical:

Conclusion: youTube thumbnails can be (almost) NOT previously calculated

On the basis of this test can be stated as follows:

So what to do to set yourself thumbnails?

Long story short: I would rather try it with trial and error. So, upload a video and check the thumbnails. If unsuitable, change video length slightly (one second more or less), and then the whole thing again. As long as a thumbnail fits. This is the subscribers does not annoy it, you should do it in private mode, or have a second test channel.

But maybe someone else has another idea of how to determine the youTube thumbnail itself?

Here my original german version of this article. 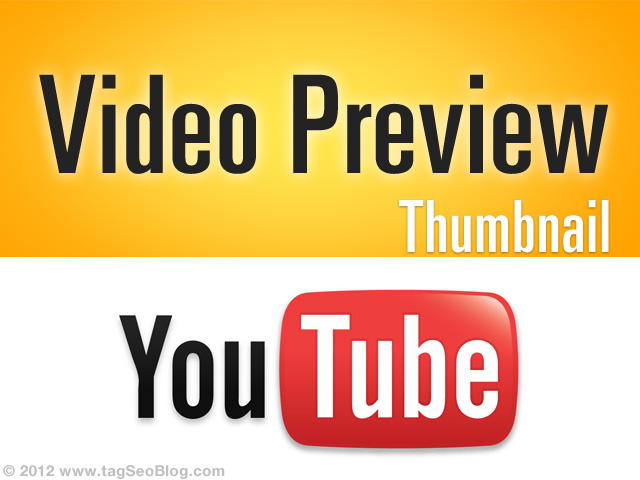